Our objective is to provide diagnostics laboratories and research institutions with fast FISH and fast PCR solutions that will disrupt diagnosis times and costs.

Our mission is to reduce test time, eliminate the anguish of waiting and save patients’ lives.

To achieve this mission, we count on key values shared by our team:
Quality, Competence, Accuracy, Teamwork, and Integrity.

Initially, the company was called DoMo Genetics and won the first edition of the Launch Pad Program and enrolled in the TVLP.co mindset program in Silicon Valley (Menlo Park, SF). During this 20-days program, our company was awarded one of the best projects.

One year later, OaCP was officially incorporated and was selected to take part in the RebelBio Accelerator Program in Cork.

We have an aggressive and strategic growth strategy that has seen us securing distribution agreements with companies in Japan, South Korea, Latvia, Australia, New Zealand and India within the first 4 months of incorporation.

Our company is headquartered in Ireland with an R&D dept. at the Bologna University, where we enjoy not only their world-class equipment and facilities but also maintain key industrial partnerships and collaboration with the University and research groups.

Master at BBS and H-FARM 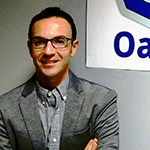 Achieved by OaCP, Oncology and Cytogenetic Products in years 2015-2021 for the efforts in molecular biology and in fast laboratory diagnostics.